I’m a female who enjoys active sports and adventure.

I’m a female who has often worn my hair short and doesn’t usually wear makeup.

This does not automatically make me a tomboy a butch or a dyke. No matter how often I’ve been called these names or similar terms.

I recently saw a meme on social media which made me mad. It was a picture of a girl on a skateboard. The caption read “Every cool girl is half boy”.

What the hell is that meant to mean? Only boys ride skateboards? Being ‘just’ a girl is never cool enough? Does that make a ‘cool’ boy ‘half girl’?

This meme goes hand-in-hand with my hatred of the term ‘tomboy’. The implication is that you’re not a girl if you like a bit of action and adventure.

I’ve frequently been called a tomboy, probably since I was age three and preferred dressing up as a pirate rather than a princess. When I was a teenager with short hair and short pants, I was often mistaken for a boy. Once I’d grown up and a set of breasts clarified any gender questions, people often assumed I was a lesbian. I don’t have a problem with that label – love is love wherever you are lucky enough to find it. But it’s my hormones that dictate my sexuality not my choice of hobbies.

I had short hair for a long time (it’s easy-care). I didn’t have a serious boyfriend through my twenties (I travelled the world instead). I’m almost always wearing shorts (it’s practical in Queensland). I don’t often wear make-up (seems like a waste of time to do it every day). I have an unmelodic low-pitched voice (it’s genetic, on my father’s side). I started surfing when I was a teenager and haven’t stopped (it’s so much fun). I did martial arts as a teenager and took it up again recently (I enjoy the challenge). Clearly, I must be a lesbian or half boy or some combination of the two. Does that make me cool these days? I don’t really care anymore. I have spent a lifetime shrugging off these sorts of barbs and they no longer stick.

But don’t you dare infect my daughter with this misogynistic sexism.

My pre-teen daughter is a different type of person to me. Ever since she was old enough to voice her opinion, she has favoured dresses and the colour pink. She went for about six years refusing to wear shorts. She paints her nails and begs me to buy her make-up. She’s done ballet classes for years. By her own unconscious choices, she’s slotted into society’s stereotypes.

But she has me for a mother. So she rides bikes, scooters and rollerblades. She can kick and punch hard enough to hurt a person. She thinks nothing of getting dumped by a wave while she learns to surf. She does these things because I’ve encouraged her to have a go at them and she’s enjoyed them. It doesn’t make her half-boy. It doesn’t make her cool. It doesn’t make her any less – or any more – than her own individual self.

She’s a kid, trying out different things and seeing what she enjoys. She’s never been called a tomboy. I think it would confuse and upset her if someone did. She’s happy being a girl. She shouldn’t be made to feel anything other than that, regardless of her choices.

Fun is gender neutral. Don’t make it anything else. 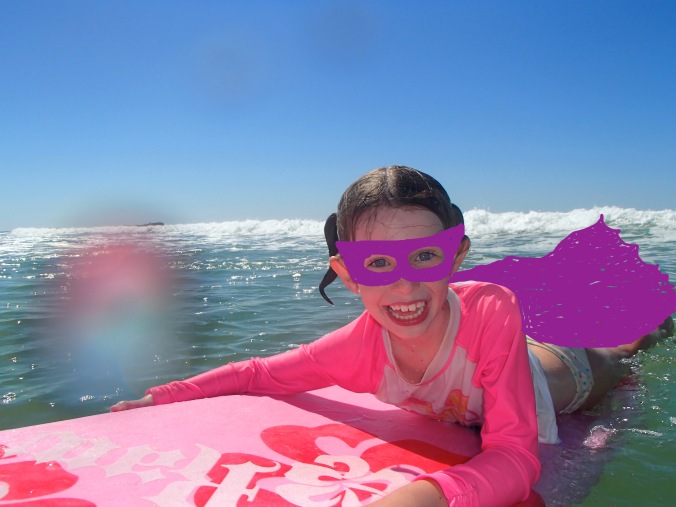 A kid having fun. Simple.