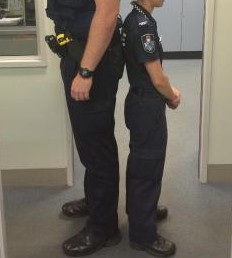 A recent item on the news caught my attention. It was about Queensland Police Service’s latest initiative to have equal numbers of males and female recruits accepted into the Academy. This is part of a push that was supposedly already in the pipeline when I was accepted into the police over fifteen years ago. Back then, they were working towards having equal numbers of men and women in the police to reflect the make-up of society. And now they are at that point – Commissioner Stewart has given a direction that there will be a 50/50 ratio of male and female recruits.

Gender equality is always a touchy subject and even as I write this, I wonder if I can explain myself in a way that doesn’t make me sound like I’m selling out. My opinion is based on fifteen plus years experience, most of it as a first response officer. I have worked with a whole lot of officers – senior and junior, male and female. And I think this 50/50 policy is flawed.

The first problem is a simple physiological one. In general, women are not as strong as men. This isn’t sexism, this is biology. We’re built differently (and thank goodness for that). Of course there are exceptions, but I clearly remember an instructor at the Academy telling us that the average woman has strength equal to a thirteen-year-old boy. So the minute you are up against a fourteen-year-old boy or above, you are already on the back foot.

But police all have the same weapons, don’t they? Yes, and the same training too. But the minute you can’t talk your way out of or somehow defuse a situation before reaching onto your utility belt, the more likely someone – or everyone – is going to get hurt. It’s not necessarily a simple matter to slap on a set of handcuffs or give a quick squirt of OC spray. You have to be able to use the weapons effectively on someone who may be violent, unco-operative or drug-affected. Even if you are using an accoutrement, it is a physical and mostly violent action. It often ends in tears.

Then you have to add to this the attitude of the people you are dealing with. I’ve turned up to jobs with a female colleague only to be laughed at and told to go get the “real” police. Go to a domestic violence incident where a man has been beating a woman, turn up with two female officers in a crew and you’re already up against it. He’s just flogged his missus, now a couple of chicks want to push him around? How’s that going to go? There are also cultures whose menfolk simply refuse to deal with women. It shouldn’t happen – it shouldn’t matter who’s inside the uniform. But not every idiot on the street has got the memo that we’re equal now.

It is all well and good to say you want gender balance. But the fact of the matter is that a higher proportion of offenders are male. A quick look through recent assault numbers show about five times as many were committed by men. Having police numbers which reflect the make-up of society is pointless. It would be more useful for them to reflect the make-up of the clientele police deal with.

The 50/50 ratio suggests that there would always be a male and a female officer making up each crew. This would be great. Men and women have different strengths and different ways of dealing with the mix of people policing throws up at you. But this is not how rostering works. There are always officers on leave and shift equity has to be taken into account. More women in the police will mean more ‘bitch crews’ – yes, this is how they are referred to. It’s more dangerous working with another female officer, especially on night shift when there may be no other officers to help out. It’s not fair but that’s because the society we police is not fair.

In an ideal world, male and female police officers would be treated as equals by both their colleagues and all segments of the community. But policing is not carried out in the ideal world. The real world is a far messier place, where drugs, alcohol, testosterone and anger are often driving forces. Muscle and physical presence have their part to play. And women are at a disadvantage.

12 thoughts on “Gender equality in policing?”

Leave a Reply to Cops and Novels Cancel reply